Well, it’s Atheist week again, and that means it’s time for me to go all honeybadger-with-a-nasty-cobra every time I see that dreadful, wispy, red atheist A where my friends and compatriots faces used to be. Now, just as there’s nothing quite so tedious as a person who corrects ones grammar unbidden, I’m sure that the sight of me losing my shit over the Crime Against Typography known as Zapfino is equally odious, but lose my shit I shall.

I mean really, Zapfino for atheism? Really? This sad, flaccid font is just one thin rung above Papyrus on the ladder down to typographic hell. You can actually smell the sulfur when you look upon it. Now, these decorative fonts have their place, and while they frequently grace the wedding invitations of Mafia Don’s daughters (in genuine gold foil emboss), they’re most frequently spied on the covers of books about channeling Lemurian warriors or tomes touting the benefits of a good bee pollen and dead sea clay colon cleanse.

Trust me. I know of what I speak. I was once the art director for a New Age dog and pony show back in the 90s. Papyrus was rampant and everyone wanted to use it, but even in my tragically woo-addled state, I refused, knowing full-well it was a hokey, hot mess (unless you were doing a documentary on Ramases II, and even then, meh). I’m not sure when Zapfino first reared its flimsy ascenders, but it quickly displaced Papyrus as the go to “spiritual” or “klassy” font for people who frankly just didn’t know any better but really should have.

So that brings us up to last year when I began my abortive attempt to shame the atheist community into some sense of style by introducing a bold, graphic, negative space version of the A in the font du jour, Gotham (ultra). Oddly enough, it never really took off even though everyone who followed my blog loved it. Both of them. Okay, and one of them’s my mom, but that doesn’t diminish my choice of font in any way.

But really, one could use just about any of Hoefler Frere-Jones awesome fonts and it would be just dandy with me. For me, Gotham has presence, balance and strength. All the qualities I want for a modern day scarlet letter that boldly proclaims the atheist credo of “no gods, no masters!”

“But, Gotham is all over the place now” you protest. Well, this is true. It rose to prominence as the Obama font and now you can go into any Rite Aid and even in that design-challenged retail landscape, you’ll find that all the posters in the pharmacy are in Gotham (oh, and they all look totally elegant and modern). This stardom won’t last forever, mind you. Tastes will change, but Gotham is a classic, and classics can always be relied on. There’s the clean efficiency of Helvetica. The machine age elegance of Futura or Lubelin. The stoic grace of Garamond and the simple honesty of Century Schoolbook. Any of these fonts could have been used instead of the diaphanous and floppy Zapfino to far greater effect. So I offer once again my favorite A for use by our intrepid band of heathens. None other than Amy Davis Roth herself has adopted it in ceramic form to great effect (inducing yet another one of my skeptic community Sally Field moments).

But don’t take my taste for gospel Mad Artists, try your hand at it! Cast-off that nasty Zapfino and find a strong, strapping A and adopt it as your own scarlet letter. It can be captial or lower case, roman or italic. Have fun. Be intrepid. I say keep the red though, it’ll lend consitency and I think it’s vibrant, bold and suits the intended sentiment.

Well, I feel better now. Less honeybadger-with-a-nasty-cobra and more Maru-in-a-too-small-box. And I know, honeybadger doesn’t give a shit, but I do. 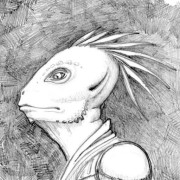