It’s Monday and I’m declaring this week a do-over for last week. Let’s try and make this one better. And to start off in that direction, I give you the Quickies. Full of beauty, levity and weirdness.

Are those fish really in that bowl? No? They’re paintings made by layer upon layer of resin?! Yes! New work from Keng Lye.

I wish all of David Lynch’s movies came with a glossary or explanation sheet. But at least Dune did!

The Velvet Worm seems like some kind of living nightmare. Gross and amazing. (video below)

It’s a good thing that fictional products don’t violate trademark laws because the screenplay I’m writing has a product called Facebook. It’s just a book that you can buy to set on your face so no one will bother you.

I love 3D illustration. I love alternate movie posters. And like peanut butter and chocolate, the very talented Lizzie Campbell has combined the two.

Conveying movement in a painting can be quite difficult to do well. Enter Simon Birch and his beautifully kinetic figures.

As usual, Zach Weiner has shed a whole lot of light on why some “Science” channels don’t have any science programming. 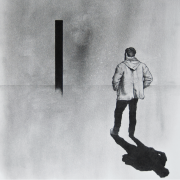 Brian George is an illustrator and designer who lives and works in Brooklyn, New York. In his spare time he makes videos of Spirograph drawings and complains about doing laundry. Website: www.bgeorge.com Twitter: @brianggeorge Insta: @brianggeorge If you're into what I'm doing, feel free to throw down a bit in my tipjar here: @brianggeorge