Hello there, Lab Rats. Apologies for the late post, but I’m back to let you in on one of Hip-Hops best kept secrets: Open Mike Eagle. As a member of the Hellfyre Club collective (who has an impressive roster including personal favorites Busdriver and Milo), Mike has found his own track making heady rap over some of the more interesting, less cookie-cutter beats unlike those that permeate much of popular hip-hop. On Dark Comedy in particular he flows over production that is low-fi, eerie, minimalistic, and perfect for his laid back approach to rhyming. It feels like a comfy old couch Mike leans back on, allowing Mike to pat the cushion next to him asking you to sit down and listen to his profoundly deep and occasionally profoundly hilarious verses about being an everyman as an alternative to the glitzy facade of pop rap we’ve come to associate with the genre. As he says in the album opener “Dark Comedy Morning Show,” he makes ‘Rap songs like Stephen Wright / Monotone Drone, People wondering if he breathing right.’

Open Mike Eagle’s greatest asset in my mind is his relatability, making references that range from technology to family life, Adventure Time to professional wrestling. He’s also a big fan of They Might be Giants, even going so far as to include part of “Don’t Let’s Start” from the band on his track “Sadface Penance Raps.” I definitely had to check out the Rap Genius album page to catch some lyrics that flew over my head. Regardless of whether any of it goes over your head, these songs are bound to get stuck there anyhow. He certainly doesn’t pull any punches though, calling out Rick Ross calling himself “President of the rappers that don’t condone date rape.”

The lead single “Qualifiers” finds Open Mike Eagle poking fun at the braggadocios nature a lot of rappers, pointing out examples of things that are actually worth being proud of (helping take care of his family, writing songs that aren’t about ‘bitches and hoes’). However, he does it in a humble manner as the chorus shows: “We’re the best, mostly / Sometimes the freshest rhymers / We the tightest kinda.” Also, if you’re the kind of nerd I am, you’ll want to play Goldeneye, Words With Friends, and RPGs with Mike. Check out the video Ryan Calavano below.

Another favorite track from the LP is “Very Much Money.” We’re constantly told by society that money is the barometer of success, but Open Mike Eagle takes that idea to task here, saying, “That shit’s not valuable / That shit’s disposable / It’s not authentic though / That’s so ingenuine / Come say it to my face.” He brags on his friends that have skills that are noble, but don’t pay the bills, such as Judo, writing, yoga, magic, comedy.That’s a crying shame (something artsy types can certainly relate to, I’m sure). On top of all of that, he manages to tie in Simon Petrikov (better known as The Ice King from Adventure Time!). If you haven’t already, you should check out the heart-wrenching Adventure Time episode ‘Simon and Marcy’ in which Simon trades his sanity/personal freedom in exchange for power. Below is a live performance in a bowling alley directed by Giovanni Solis.

Bringing the comedy to the forefront is “Doug Stamper (Advice Raps)” featuring the one and only Hannibal Buress. The two flow in order to offer (often hilarious) advice to the listener, such as don’t sing Kashmir at karaoke, don’t wear a muumuu in Korea town, and eating appropriate amount of fiber so as not to get constipated. Playing the role of Doug Stamper to the listener’s Frank Underwood on House of Cards, Mike and Hannibal give advice that may not be quite as life and death as that which is offered to a congressman, but manages to be laugh out loud entertaining. Check out the tumblr/internet inspired video by Tamara Wofford below.

If you’ve enjoyed any of the songs you heard above you can check out the entire album via Bandcamp here.

If you’re a vinyl nerd like I am it’s you’re lucky day. The pre-order for the LP has been extended, so you can pre-order the album on some gorgeous wax here straight from Mellow Music Group (even if you’re not into collecting records check it out. It’s a beautiful blue/green/yellow record). As always, thanks for reading/listening. I’ll see you later this week for another Album of the Week. 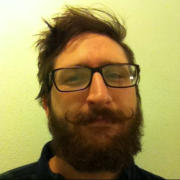 Your grand-unified-theory-of-humor is a joke.