If it is possible for a graphic designer to avoid being even a little bit of a type nerd, I have never met such a person. The form of the markings that allow our minds to create magnificent scenes, that can evoke grand emotion, and bring such great, silent joy… what manner of person would not be at least mildly interested in how that comes about? Or in making it clearer, more evocative, with seamless flowing thought between the page and imagination?

Even if typographers, type designers, comic book letterers and even graffiti artists concern themselves with kerning and x-heights only so the rest of you don’t have to, there are still a lot of really damn fascinating things going on with these marks we take so much for granted. And from the origins of proofreaders’ marks to the lingering effects of manuscript production that still hold in modern print shops, I’ll admit that I do take a pretty broad view of ‘typography’ as being pretty much anything having to do with printed lettering. (Yes, hand-printing included.) All the more weird and interesting things to share with you lovely folks!

F’rinstance, if you’ve ever seen or heard of “filler text,” used as a placeholder for un-finalized body copy in a document or website, it’s basically referred to as lorem ipsum (for the first words of the Latin passage) or greeking and yes, it’s a real thing. Depending on where you find it, the “standard” lorem ipsum text may or may not really be Latin any more, but it really did start out as a passage from Cicero’s “de Finibus Bonorum et Malorum” (The Extremes of Good and Evil), written in about 45 BCE. It’s been used as “dummy” text nearly as long as printing has been a thing, when a galley of type was mixed around to make a type specimen sheet. (You can only look at your ABC’s for so long.) Even then, they knew that people would immediately start reading anything in a recognizable pattern of language, so they made nonsense so people would actually focus on the lettering and how it looked. 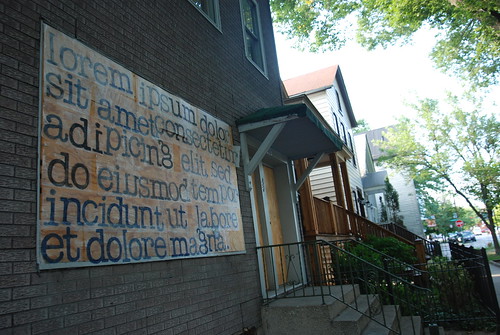 Many word processing and layout programs come with a built-in lorem ipsum generator, but there are a number of online versions as well. The go-to site is lipsum.com, but there’s also Bacon Ipsum and Veggie Ipsum, Gangsta Lorem Ipsum and Samuel L. Ipsum (also in a “lite” version without all the cussin’), and even a Charlie Sheen version for all your surreal text needs.

Want more pop culture? Malevole combines TV theme songs into paragraphs of epic proportions. Fillerama uses dialogue from Futurama (natch), Star Wars, Dexter, Doctor Who, and Monty Python (with handy HTML to boot). Beer and Liquor ipsums are exactly what you’d expect. Hipster Ipsum is probably too cool for you, and  I know there’s a classic literature one around, but I can’t find it. (HOLY FOO, there’s more.)

Whyever would you need such a thing? Honestly, I’m not really sure what most of you would need a lorem ipsum generator for, but I use it in both web and print mockups to literally fill in where words should be but I either A) don’t have them written yet or B) want the focus to be on the design and layout of what I’m presenting rather than having people settle in for a good read. Much like pareidolia makes us see faces where none exist, people have some compulsive need to read words wherever they are written. When I want a discussion of my work to be about something other than sentence structure, I can’t put in “real” words so lorem ipsum it is.

If there’s that much (and oh, there’s more) to say about words that aren’t actually meant to be words, aren’t you curious about other weirdnesses of printing and typography now too? Like why there are so many f’s in old manuscripts? (They’re not really f’s.) Or what do you call it when a comic-book character swears? (Maladicta.) And what the hell is a pilcrow, anyway?

Get ready for more vaguely-typographical nerdery, folks. I’ve got a degree in this stuff, and the whole Newberry Library to tell you about.