You’re a rooster who’s down on his luck.  Your comb is a bit shabby, your fighting skills aren’t up to snuff, and we’re not even going to mention the state of your wattle.  Chances are, you’re a beta male in your little social unit, and most likely, every time you start trying to attract a hen by pointing out a bit of delectable food, the alpha male comes over, pushes you out of the way, steals your food, and offers it to your prospective girl.

It happens to the best of us.

Now, if you were as mindless a beast as the popular conception of chickens holds, your amorous career would be over.  Too weak to climb the social ladder, and too dumb to do anything about it, you’d sit on the sidelines in a lifetime of moping and yearning.  But don’t start writing maudlin poetry yet, because you’ve actually got quite a robust catalogue of complex behaviors at your disposal to win the girl after all.  But before we reveal those behaviors, let’s turn to the person who discovered them, Experimentalist Supreme, Dr. Carolynn L. Smith. 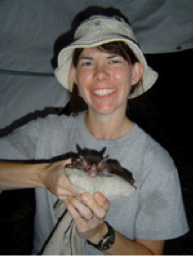 She was born in Potomac, Maryland in 1969, a child of the suburbs like so many of us.  And while her Saturday mornings consisted of the usual (and quite unbeatable) combination of Warner Bros cartoons and refined sugar masquerading as cereal, her afternoons were reserved for her true passion, watching animals in nature. Tromping through the woods, listening to the native birds and chasing the elusive crayfish, and always asking why. Why are things the way they are?

Questions about nature soon led to questions about electronics. To satiate her curiosity, her parents were always buying her second hand electronic devices from garage sales just so she could take them apart and gleefully probe their inner workings.  It’s a habit which one can’t help but think came in handy as a scientist later when she had to create covert poultry cameras, robotic chickens, and other experimental equipment on the fly.

And so she found herself by high school soaking up all the science she could get, and particularly all the biology. Her career choice seemed obvious but when in college The Dread Question reared its head, “Am I going to be able to earn a living at this?,” she flinched.

Stability or passion, the old shell game.  For four years, stability won, and Smith pursued an undergraduate degree that would lead to a career in law, but could never quite get the siren call of biology out of her head.  So, fortunately for the rest of us, she went back to college and got her degree in biology*.  It was the right choice.  She described to me a moment, on New Year’s Eve, sitting on a cliff in the beautiful sub-tropical country of Trinidad, tracking bat movements in the growing dark when the realization dawned upon her, “I love this, and want to do it for the rest of my life.”  It’s the sort of exquisite thing you hear from scientists quite a lot, from lawyers, not so much.

Smith specialized in animal behavior, and in particular in communication.  How much information are animals able to communicate to each other, how flexible are they in its expression, and what does their ability to communicate say about their capacity for complex social interaction?  These are vitally important things to know in a world where the treatment of animals is ever more closed away from public view behind a curtain of, “Don’t worry, they’re too brutish to care about what’s happening to them, go about your day” PR.

Starting in 2009, she published a series of articles on her research with Gallus gallus (chickens to the rest of us) that makes for fascinating reading to anyone who likes chasing down a scientific mystery at the side of a truly gifted experimentalist.  In them, we see Smith designing a series of virtual chickens to probe the purpose of the elusive wattle, creating a high-tech but still naturalistic chicken aviary to document subtle variations in communication modality, and even improvising tiny camera harnesses to allow observation of chickens at their most secluded.  Each new discovery opened up new avenues to investigate the increasingly complicated world of chicken behavior, and to read them one right after the other is to go on quite a delightful adventure indeed (there are links to all of them in the Further Reading section below if you want to skip ahead and dig in now!).  As fun as they are to read, though, the results have some quite sobering ramifications.

It turns out that chickens are exceedingly clever in altering their standard behaviors to fit new situations.  Putting you back in the talons of your former beta rooster self, for example, what you might do is vary your food displaying ritual to omit the audible part, attracting the female but without making the noise that would bring the alpha male down upon you.  Or, if you’re quite clever indeed, you’ll wait until the alpha male is by himself and a predator is circling overhead, find cover for yourself, and then emit a call that will attract the attention of the predator towards the vulnerable alpha male.  It’s a bit devious (quite unsporting), but it does solve a problem.  Smith observed all of these behaviors over the course of her studies, and more besides, all of which confirms the idea that these animals live quite a tight and intricate social life, that they are decidedly clever critters, and that we should probably rethink the assumptions of factory farming.

If the start of a scientific career is pure romance, its development is controlled by the creeping weight of pragmatism.  Time that could be spent in research is consumed in scratching for grants or dealing with administrative duties and sometimes years of important work simply stop because the funding dries up.  For just such a reason, Smith’s work on chicken behavior came to a premature halt.  “Funding priorities have shifted”, the deities of research grants declared, (code for “We are done caring about this,”) and so years of work and progress simply came to an end in a story familiar to anybody involved in modern science.

But you can’t keep a good scientist down, and Smith moved on to study the only logical next animal after chickens.

Asian elephants, since you asked.

Again, her research is geared towards communication, but with a special focus on species conservation.  Elephants, like chickens, are social creatures with complex communication and a capacity for empathy.  In captivity, elephants often experience social conditions that are very different from the wild, which means they don’t have their normal extended support network. This can cause stress and behavioural problems. Smith’s research combines behaviour, communication and hormones (because, as Jurassic Park taught us all, you’re not a real scientist until you’re elbow deep in poo samples) to understand what makes the animals happy (and worried) and is developing new technologies to use this knowledge to create virtual social support networks. Her work continues to remind us about our duty to ethically treat socially complex creatures (big and small), which various industries would rather we not think too hard about.

And along the way, even as months are spent filling out grant proposals instead of logging hours upon hours of chicken head movements, Smith gets to foster a new generation of students as they discover the romance of science for themselves, which is a rather nice recompense, after all.  The child who asked why of the world grew up to be the person who explains to that world, Here’s Why.  And not only is she finding those answers, but she’s using them to make us all a bit more thoughtful in our stewardship of this planet’s amazing life forms, to both their benefit, and ours.

* Note from Smith’s Soapbox: Dr. Smith particularly recommends that you find a scientist who does something you think you’d like to do and volunteer in their lab. It only takes a few hours and you can learn if this is the right career for you. Even if it’s not, critical thinking and science literacy are skills that are valuable for any career.

Here is where you can find links to all of Dr. Smith’s Gallus gallus work and, as I said, it’s worth starting from the earliest and just reading them straight through like a grand investigative novel That Actually Happened.  I asked Dr. Smith for three books she’d recommend for anybody interested in learning about Animal Behavior, and because she is awesome, she obliged!  They are:

Exploring animal behavior in the laboratory and field. Edited by Bonnie Ploger and Ken Yasukawa.

A Short History of Nearly Everything. Bill Bryson.