Halloween is coming!  This marks the beginning of the sugar/dessert themed holidays.

But really Halloween is about costumes and parties. And those parties must be decorated.

I found this nifty lantern pattern and decided to turn it into a Jack-O-Lantern with an LED inside. My first two tries on the left didn’t look so good. The eyes were too far apart on the first and she really needed a mouth. The third one tuned out pretty, so I’ll show you how to make it.

I got my LED’s and battery from Brown Dog Gadgets, as part of their LED throwie pack.  In the interests of full disclosure, I work part time for them. But really any LED and CR2032 battery will work.

Before you start cutting, I made one change to the lantern pattern. I added a larger circle in the center for the battery.  This will go on the bottom.

Next draw the lantern face on the white pattern. If you don’t like how it looks you can always try again. Cut out this face and trace it onto the orange construction paper.

Next cut out several small pieces of transparent vellum and tape or glue them onto the back side of the orange paper.  Tape the two sides of the lantern together to make a circle.  Important tip: only secure the bottom of the vellum covering the eyes.  The top needs to be loose so you can close up the lantern later.

Next cut tiny slits in the center of the circles/tabs at the top and bottom of the lantern.  They only need to be big enough for the pipe cleaner.

First we will close up the bottom.  Insert one end of the pipe cleaner into one of the small tabs next to the big battery circle.  I left about one inch sticking through.  Bend this end into a half circle and threaded the other 4 small slits onto it.

Insert one LED leg (doesn’t matter which) through the slit at the center of the large circle, and bend the other leg 90 deg.

Next bend the LED leg into a U shape as shown.

Bend the remaining LED leg around the paper.

Cut out another circle of orange paper to cover the bottom of the battery. Use the two small magnets on either side of the paper to hold everything together.

I snugged the pipe cleaner around the LED, tucking some of it underneath.  You can tape or glue it together if you want something more permanent.  Here is the view from the top.

Next thread the top of the pipe cleaner through the slits on the top tabs.  Its starting to look like a pumpkin!

Finally, bend the pipe cleaner over to form a stem and wind the remaining end around a pencil. Voila! 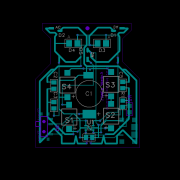 We Need Some Mad Help With a Logo!