At my Puppetry Guild meeting last night Annie Katsura Rollins discussed Chinese Shadow Puppetry, and her work studying it. One of the things she mentioned, mixed in with a fascinating history lesson on the art form and how the puppets are made, was that part of her work was in preserving this living folk art form as it approaches its probable end.

As with many other folk arts, Chinese Shadow puppetry is proving to be not financially viable in the modern world, and will come to an end in the next few decades. The existing masters of the craft are aging, and do not have any apprentices who are studying to be masters. In the case of Chinese Shadow Puppetry the effort to preserve it at all tends to be in the commoditization of it with the apprentices learning only parts of the process to make the puppets, but few performing. The apprentices that there are, primarily learn only how to do one of the tasks: prepare the leather, cut the puppets, paint them, etc. Likewise there is a modern machine-made (laser-cut) method of making these that are sold to tourists, which are far inferior to the hand cut ones and unsuitable for the rigors of performance. 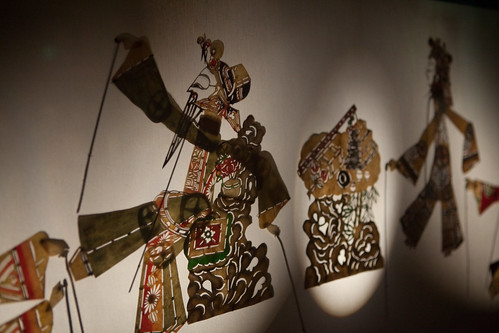 The part that struck me as interesting was her comment on studying the best practices of preserving a living folk art. We tend to focus on filming and photography and preserving artifacts, but we don’t appear to have much in the way of preserving the entirety of the folk art itself (methods for funding apprentices to become new masters and such). It also tends to be on such a short timeline (“oh crap, all the masters are in their 80s”) that anything we do is a best guess effort at how one might preserve a form folk artistry.

I’m hopeful that Annie will be able to learn what those best practices are and develop methods for implementing them. I love the idea of doing that rigorous analysis to make sure that what is being done to improve something is actually the best way to go about it and not just making us feel like we’re helping. If you’re interested in learning more about Chinese Shadow Puppetry you can check out her website: http://www.chineseshadowpuppetry.com/ or attend the webinar for her class at The Center for Puppetry Arts here in Atlanta.

Death by Puppets: Does it come with Aliens?!