A square, who works as a lawyer in the two-dimensional world of Flatland, sits down with his hexagonal grandson:

This excerpt, from Edwin Abbott’s lusciously nerdy 1884 satire Flatland, was written on the eve of Einstein’s space-time revolution, and captures nicely the common sense anxiety of casting one’s imagination beyond the space you happen to live in. Over a century later, four dimensions are the least of our mathematical worries, and the way forward is lit by our own irrepressible human hexagons – people with the knack for peering into abstract spaces and wrestling from them consistent laws. And of all our daring hexagons, few rank higher than the first woman to win the Fields Medal, Maryam Mirzakhani.

Mirzakhani is a scribbler of the first order – a kinetico-visual thinker who fills vast sheets of paper with sketches probing at the edges of math’s biggest problems. Only 37, she has already solved enough of pure math’s Insoluble Enigmas to fill two careers, and her pace shows no sign of slouching over past greatness.

Born in Tehran in 1977, Mirzakhani was from the first a courter of the unlikely. A daydreamer and bookworm, writing seemed a natural choice (and, considering the literary-artistic bents of Kovalevskaya, Carson, Mead, Friedman, and Gianotti, perhaps we can finally put to rest the old arts-sciences binarism?). Her lively talent was recognized early, and she was diverted into a school run by the National Organization for the Development of Exceptional Talent where, after a slow start, she soon became the star mathematical pupil, winning the Olympiad gold medal two consecutive years.

That led to an undergraduate degree at Sharif University, and thence graduate work at Harvard, where she produced her first mathematical masterpieces. These papers dealt with hyperbolic surfaces and moduli spaces. And that’s where we get into some MATH.

The story of hyperbolic surfaces is, really, one of the oldest tales that math has to tell. It all begins with the Axiom That Wasn’t, Euclid’s 5th. From its birth, mathematicians found it an odd duck, a statement that didn’t quite seem to fit with Euclid’s other foundational assertions. Stated in modern terms, it simply says that, if you give me a line and a point not on the line, then there exists exactly one unique line through that point which is parallel to the original line.

And so there is, as long as the space where those objects live happens to be flat. So evident does it seem that mathematicians spent entire careers trying to bend geometry to make it fit naturally in the position that Euclid gave it. To no avail. Finally, after centuries of futzing, it was realized that one could, in fact, construct geometries where The Fifth was not true, one of which was the hyperbolic plane, most easily visualized, I think, through the version known as the Poincare half-plane, sketched rather loosely below. 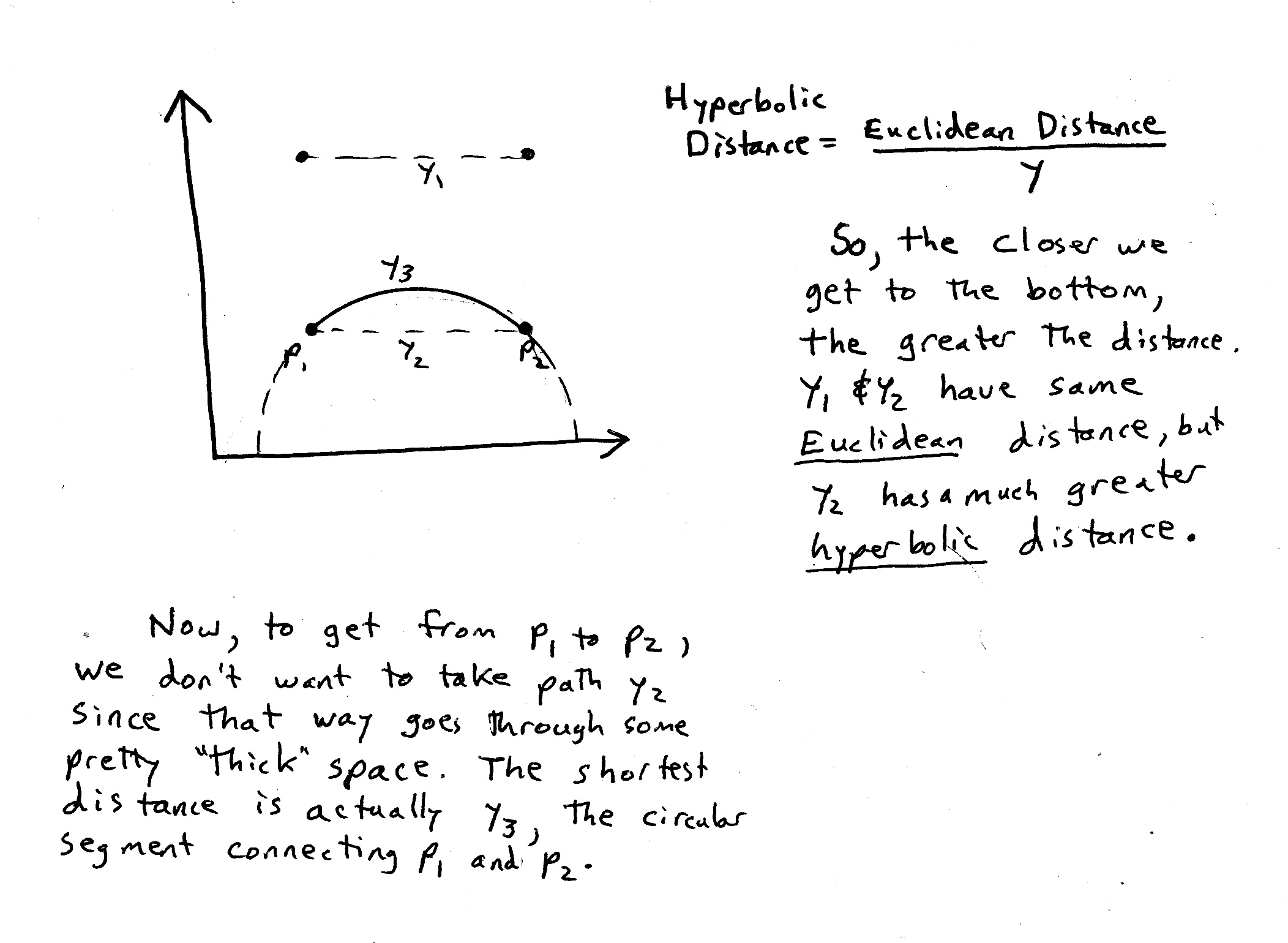 In this world, all space is not created equal. It gets, in essence, thicker as you move closer to the bottom of the half-plane. My hyperbolic geometry teacher used to tell us to think of it as having the consistency of honey near the bottom axis- hard to move through- and getting progressively easier to navigate as you moved upwards. As such, the quickest way to get from one point to another directly to the right of it is NOT the straight segment that connects them (y2 in the figure) – that way you’d be running through the thickest space the whole trip. Far better to head upward, where the path is a bit easier, and then to loop your way back downward. And in fact, the path of shortest distance between these two points, called a geodesic (remember that word), lies on the semicircle through them which has its endpoints on the bottom line (y3 in the figure).

So, since lines in this world are semicircles, it is possible, if you give me a semicircle and a point not on it, to construct more than one semicircle through that point that does not intersect the original semicircle, and therefore is considered parallel to it. This space obeys Euclid’s first four postulates, but breaks the Fifth, and introduces a slew of new geometric possibilities.

A hyperbolic surface, then, is a metric space (a space with a way to measure distance) where, if you take a neighborhood around any point, it is related to a neighborhood of points in the hyperbolic plane we just talked about. Such a surface contains all the craziness of the original hyperbolic plane, kicked up to the next level. These surfaces, understandably, inherit some rather interesting geometry, and it was Mirzakhani’s task to tame the chaos. In particular, she wanted to break the mystery of how many simple closed geodesics of a given length a hyperbolic surface possesses.

Put more plainly, how many shortest paths of a given length are there which form a closed loop without intersecting? Let’s stop and appreciate how intense that question is. It is asking for a method to determine, for an object that can’t exist in real space, with geometry inherited from a brilliant non-Euclidean dodge, with geodesics ranging from the infinite to the well-behaved, how many of a given length there are going to be, which don’t cross themselves, which end where they begin.

Insane. But Mirzakhani did it, and that was just part of what she accomplished as a grad student. From there, she has studied the world of moduli spaces, which are harder still to grasp. Oversimplifying egregiously, a moduli space is a space where each point represents some mathematical object or class of objects. Mirzakhani’s research has focused on Teichmueller spaces, which are closely related to the Riemann moduli space. Basically, to get a Teichmueller space, just take a surface, let’s call it X, and make complex structures out of sets of equivalent maps between that surface and the Euclidean plane. Doing just that lets you construct the Riemann moduli space of X, but if you add one more requirement about what it takes to call two structures equivalent, you get Teichmueller space.

In other words, a Teichmueller space is a space where each point represents a class of equivalent complex structures. That’s a pretty darn abstract mental world to live in, but then to think about what happens when you put a strain on that system is something else entirely. Mirzakhani’s work considered what happens as geodesics are made to flow along a Teichmueller space, discovering that the phenomenon has ergodic properties. That realization brought a whole new realm of tools to bear on the problem, and broke it elegantly from Impossible Conundrum to Solved Case.

And it doesn’t end there. Work on billiard reflection with Alex Eskin resulted in a paper that opened up brand new sprawling fields of mathematical research. As ever in mathematics, work in the physical world lead to new abstract results, which themselves lead to entirely unexpected physical ramifications. Based now out of Stanford University, and with a decade and a half of tackling and solving the big problems of math behind her, there is no telling what new bizarre worlds she will unveil as her mind crisses and crosses the mathematical landscape, searching for connections where there was before only befuddlement, and in all senses being the hexagon that leads the rest of us squares to comprehend, if just tentatively, the hidden structure of the abstract world.

FURTHER READING: If you want to start getting into this area of mathematics, and have had the usual upbringing in math, a good place to start is Topology by Munkres. It gives you the framework for thinking about open sets, mappings, and all the good stuff you need to think about what happens as we cut and paste the edges of reality in new ways. For the hyperbolic plane, I like Saul Stahl’s The Poincare Half-Plane: A Gateway for Modern Geometry. It develops the Euclidean stuff at a good pace before having you jump into the hyperbolic material and requires really just basic calculus and trigonometry.