This is a guest post by Dori Mooneyham. Dori is a bi, poly, trans woman studying counseling and psychology in Texas. She’s also the host of Secular Shethinkers, a podcast and blog about social justice and fangirling from a non-religious perspective.

In the past year or two, society has seen a big shift in how trans people, and trans women specifically, are portrayed in the media. Where it was once mildly permissible to have cis actors tell trans stories because, at least we were getting something, now a cis actor playing a trans character is becoming more and more controversial. Because no matter how dedicated the portrayal is, how sincere the actor is in wanting to “get it right”, how genuinely the creators want to help the transgender community, or how much it moves their primarily cis audience, they will always get something wrong, and often they’ll get a lot of things wrong. It’s almost a running gag in the trans community at this point. I’ve had many a “trashy trans movie night” where we get together to watch Transamerica or Boys Don’t Cry and tear it to shreds over popcorn and alcohol. Where we were once happy with whatever table scraps we could get, over the last decade we’ve been creating our own art that accurately depicts our lives. We now have a slew of well known, outspoken trans activists and artists like Janet Mock, Fallon Fox, Laura Jane Grace, Carmen Carrera, Lana Wachowski, Jenna Talackova, Candis Cayne, and (my personal hero) Laverne Cox.

Which means we are no longer satisfied letting cis people tell our stories for us. 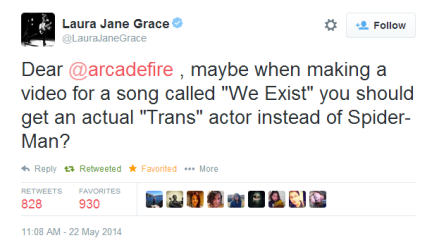 The problem with the first example is confusing identity with attribute. Being trans (or gay or bisexual or any other invisible minority) is a core identity. Identity is an essential part of the character that cannot be changed by the plot, rather than something the character acquires over time through circumstances. Attribute is a detail about a character that has been accumulated over their lives through circumstance or consequence, attributes can be altered as a result of the plot. To continue with our poor example, an inmate released from prison ceases to be an inmate. Now they have a new attribute, ex-con, and learning to navigate this new attribute could be the start of their character arc. A trans woman, on the other hand, cannot cease to be a trans woman through any plot device. She could de-transition and go back in the closet, she could start out in the closet and transition in the story, but she always has been and always will be a trans woman. This is a distinction that is often lost on creators who do not have that same core identity as their character, which is why people who actually have that identity need to be involved in the creative process. Otherwise, you will inevitably resort to stereotypes which will misinform your well-meaning audience.

And it’s that well-meaning audience that makes this so problematic. The majority of cis people who watch these movies are not terrible people. They are not transphobes. They want to be educated about trans people so they don’t do shitty things to trans people. They probably care about queer rights, but might not know any trans people. So they reach out to the media to inform them. And it sucks when they’ve been genuinely moved by something, only to find out that the trans community is not happy with it. So often, rather than acknowledge the problems trans people are pointing out with the film, they get defensive. Because they don’t want to be embarrassed, which is a typical response all of us engage in, but something that ultimately causes more harm to the community you were trying to help with your portrayal. They’ve gone from being curious and well-meaning to viewing the trans community as hostile and ungrateful (which is a product of privilege but that’s a rant for another day). It’s how I initially felt about movies with mentally ill or disabled characters I enjoyed, until my education and interactions with disabled people corrected my misconceptions. Owning my mistakes is embarrassing, but it has hopefully made me a better person.

So what about the second bad example of a gay actor playing a straight character? Well the problem with this comparison is that invisible majority identities (straight, cis, able, etc.) are almost never essential to the plot of those characters. When is the last time you saw a movie where a character came out as straight? Or even mentioned they were straight except as a heterosexist response to a non-straight character? (“Whoa, bro, I’m straight!”) And I’ve never even seen a movie that used the term cis to describe anyone. Instead, we are intended to resort to heteronormativity and cisnormativity about those characters unless they specifically identify as not-hetero or not-cis. There is also bisexual erasure to consider. Most assume a character is either gay or straight, depending on their gender and the gender of who they are currently attracted to in the story. So most people see Barney Stinson (the disgusting womanizer from How I Met Your Mother) as a straight character played by an out gay actor, Neil Patrick Harris, because the character’s sexual orientation and gender history are never explicitly discussed (as far as I know, I can’t stand this show). In reality, Barney could just as easily be bisexual, pansexual, and/or a trans man and it would not change his character or the plot. 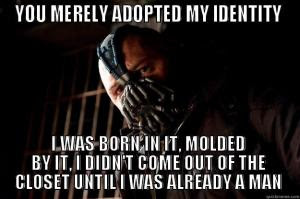 Even without the problematic assumptions that all characters are het and cis unless specified, complaining about an actor of an invisible outgroup portraying a character of an assumed (but for the sake of argument, also explicitly stated) ingroup, misses an important aspect of being a member of an outgroup. The culture, media, education system, and everything else expect you to be knowledgeable about ingroups, regardless of whether you are a member of that group or not. However, members of ingroups are not expected, or maybe even given the opportunity, to be knowledgeable about outgroups. In other words, queer children grow up learning nearly exclusively about straight culture. They are expected to be straight and cis, and often become victims if they do not sufficiently learn how to “act” straight and cis. And this is a skill they will continue to use in certain situations regardless of whether they’re “out” or not. It’s a survival technique that all members of outgroups are pressured to learn. Women learn how to “act” masculine to succeed in the male-dominated business world. People of Color learn to “act” white in order to be respected by white people. We have spent a significant amount of time and resources in our lives learning how to “blend in” or at least navigate around the ingroups we do not belong to, because we must do so in order to function. Which is why a cis actor cannot even hope to know as much about trans people as trans actors already know about cis people, no matter how “method” they are or how much research they do. We’ve been studying you guys practically since birth.

The next objection is the easiest to cast aside. “But how are they supposed to find a trans actress who can play the role?! It’s not like they’re as easy to find as a cis actor.” First of all, not my problem. If you want to tell our stories, then you need to involve us. End of discussion. Second of all, it’s the goddamn internet age. Even if we’re ignoring the increasing number of trans actors and actresses who are having a huge influence right now, you’re seriously telling me that major Hollywood studios don’t have the resources to put out a fucking Craigslist ad or find a casting agent in L.A. or N.Y.C. who specialize in queer clients? No, what typically happens is they do less than the bare minimum so they can cover their asses by claiming they tried, then they cast a big-name cis actor so the movie gets publicity and the actor can gets some Oscar Bait. 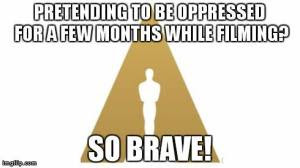 Media and Culture are mirrors of one another. If you want to change the culture, you change the media’s portrayal of it. If you want to change the media, you change the culture it exists in. The reason why so many trans activists are investing in how we are portrayed in the media all goes back to that well-meaning cis audience. We acknowledge more and more cis people are trying their best to be good allies, and we want to have a say in what media tells them about who we are and what we need, so we can change the transphobic culture we are currently living in. So we’re speaking up, coming out, and no longer allowing others to silence us. We are entering a new era in trans visibility in our society where trans women are putting a stop to harmful tropes and narratives on daytime television, holding journalists accountable for sensationalizing our love life, and not allowing gay celebrities to use trans slurs without consequence. We are gaining more power, more rights, and more allies, consequently we are losing our patience when issues are continually addressed by us but continually ignored by mainstream media.

But most importantly, we want to change the media because we want to see ourselves in it, just like everyone else wants to see their own lives reflected. Although I had seen documentaries and movies about trans women, like many people I had never seen a trans actress playing a trans character until I watched Laverne Cox on Orange is the New Black. The story was so authentic, so real, and so engaging that it now makes attempts from cis actors look embarrassing in comparison. And listening to Against Me’s Transgender Dysphoria Blues is one of the most moving experiences I’ve had with music. Seeing our own lives reflected in the work of artists who have similar identities of our own lets us know we aren’t alone in the world. So even a baby trans girl living in the rural South surrounded by cissexist churches can visualize her future out, public, successful life respected by society. And that is something no cis artist, no matter their intention or talent, can provide as authentically as a trans artist.

Courtney Caldwell is an intersectional feminist. Her talents include sweary rants, and clogging your social media with pictures of her dogs (and occasionally her begrudging cat). She's also a political nerd, whose far-left tendencies are a little out of place in the deep red Texas.