Seattle’s Emerald City Comic Con (ECCC) might be the last major comic book convention that is still actually and primarily about comic books, and as such it tends to draw a dizzying array of both major and underground talent.  Geoff Schaeffer and I have had a booth there the last four years for Frederick the Great, but this year was special for the variety and creativity of the independent comic artists present.  Here are some of my favorites who brought books grappling with gender, religion, identity, and history:

Amelia Cole is on my shortlist of best female comic heroes ever.  She’s compassionate and practical, uses a monkey wrench in lieu of a magic wand, and is endearingly down-to-earth about her tremendous potential as a magic wielder.  The first volume finds her thrust into a world split between technology users and magic users, where the latter form a quasi-benevolent oligarchy which gently but firmly dictates the way of things to the non-magic world.  It’s a condescending societal imbalance that Amelia takes it upon herself to address through the simple expedient of trying to understand the individuals within the system and help them however she’s able.  Besides that, she’s a building superintendent whose instinct for empathy is constantly getting her into trouble, an even-handed model of pure, human decency in a comicscape that stands in sore need of it.

And she has a giant golem named Lemmy.

The Gospel of Carol: (Writer and Artist: John S. Troutman)

Troutman is something of a webcomic legend, and in his new series he brings that experience to a topic rife with potential for disaster: the story of Carol, Jesus’s twin sister.  She starts out in Heaven, obsessing over human pop culture, when she is suddenly thrust down to Earth to fulfill her purpose.  As a result, she displays an interesting split consciousness throughout the book – a divine daughter of Jehovah who frames her conundrums in terms of They Might Be Giants lyrics and Tom Hanks references.  She brings a decidedly different perspective to Biblical times, at once more religious than secular readers might be comfortable with, and more secular than religious readers might be able to stomach.  She makes everybody a little uncomfortable, and that’s precisely what is needed to tackle a story like this.  Troutman has found in her a great handle for dealing with some big themes, and in the meantime treats us to a barrage of quite outstandingly funny moments to humanize the whole affair.  I have no idea where this comic is going, but it’s something you’ll be better off for reading, no matter where you are on the religious spectrum.

Two serial killers meet and fall in love.  It’s an idea that doesn’t let you quite find your footing, and that sense of being always off balance, never entirely sure what to think, is one of the delights of reading this book.  The protagonists are terrible, inhuman people, but their mutual brokenness is something it’s hard to look away from, hard not to secretly hope works out in the end.  Is it a book of humanity wrapped in inhumanity, or the other way around, or is it perhaps that humanity just doesn’t make sense as a category anymore?  You can’t read the book and then just go about your business – it quite forces you to sit and ponder for a while, how you weigh worth and parcel out sympathy, and what is really the measure of a human.  It’s one of those works of art that reminds you how little you actually have figured out, a humbling experience of a sort rare, disturbing, and exquisite. 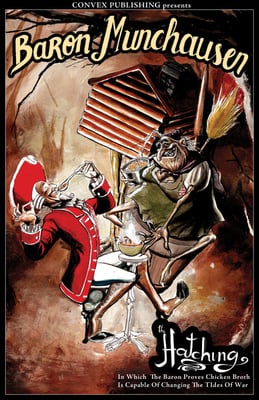 This is a slim but delightful book that places our good and improbable Baron Munchausen in the middle of a battle between Catherine the Great and the Ottoman Empire.  It’s absurd, beautifully drawn, and consistently hilarious.  Part Devlin Waugh, part Black Adder, it’s something I can see myself reading in the future whenever I need a quick fifteen minutes of pure zany happiness.  “Comrades!  The moment has come for cowardice!”