I work with awesome people.

I’ve been illustrating a new storytelling tabletop game for the past few years and it’s probably the most rewarding project I’ve worked on since I started freelancing. Part of that is how fun, different, and creative the game itself is, but much of it stems from the open and inclusive attitude the game designer, Sam Fraser, has had from the get go.

The game has gone through many changes since it’s inception, including the name. First it was called Thief, then Skulduggery, and by the time it was play-tested enough to print boxed copies, it was known as Gentlemen Thieves. Sam was on the fence about the latest name from the beginning, his reasons? While we were being interviewed by The Geekmates this past Monday, he explained,

“It’s a little bit exclusive, like it’s not perfectly inclusive, so I changed it”

The game is now known as:

As someone who has had many negative experiences in geek culture because of my gender, moments like this really stand out. It’s so refreshing to see inclusivity being made a priority in games, even if it’s something as simple as choosing a gender neutral name. This is the attitude we need to emulate to make our community more inclusive for everyone, and not just along gender lines. As artists we create culture, and need to be aware that visual representation of marginalized groups has power.

You can play Rogues to Riches at GenCon this weekend if you happen to be in Indianapolis, or pledge to it’s Kickstarter campaign to help us bring a polished final copy of the game to the world. Prints of a poster I drew recently will be going up as one of the reward levels soon: 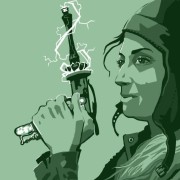 Julianne is an artist and illustrator with a passion for science, science fiction, and storytelling. She can often be found painting cephalopods at live music shows, trying to avoid mixing-up her brush water and beer but seldom succeeding. You can see her work at julianneharnish.com and follow her on Twitter @JulianneHarnish