Sometimes it’s only the truly absurd questions that can break physics from its well-worn grooves and force it to elaborate fantastic new schemes to explain reality.  The notion that, for some processes, there is a distinct right or left handed bias in nature, is one that was routinely scoffed at right until the moment it was proven true by a series of supremely elegant experiments designed and run by perhaps the greatest experimental physicist of the twentieth century, Chien-Shiung Wu.

It was 1957, and after three decades of uninterrupted progress and theoretical stabilization following the quantum revolution, the physics community found itself increasingly embarrassed by a pair of humble, but incredibly badly behaved, particles called kaons.  The Tau and Theta kaons were originally thought to be separate particles, because they decayed into products of different parities (a concept we’ll get to later), but with every new piece of data, it was becoming abundantly clear that Tau and Theta were, in fact, one and the same.

To have one particle produce offspring of different parities was something akin to a giraffe giving birth to a tapir.  By everything the physics community thought it knew, decay like that shouldn’t happen.  Something had to be done, but it would require an experiment of excruciating exactness to establish or reject parity conservation once and for all.

There was only one person in the world with both the insight and ability to pull off the experiment, Chien-Shiung Wu.  Born in Shanghai in 1912, Wu was at the center of a revolution at her very birth.  The Republic of China overthrew millennia of tradition that very year, and her father, Wu Zong-Yi, was a foot soldier in that battle.  He had read extensively on the political theory of the West and believed that China must expand the liberties and rights of its people if it were to survive in the coming era.

Forced to flee to the country town of Liuhe after the failed Second Revolution, Wu Zong-Yi made the best of his time there by establishing there a free school for girls.  Chien-Shiung attended with some fifty other girls, and never once was prevented from learning a subject because of its Suitability For Women.  On the strength of that upbringing, she entered Soochow Girl’s High School and then the National Central University, where women were encouraged to study science as full equals of the male student body, a situation decidedly not the case in the Western colleges of the era.

It was traditional at the time for a young Chinese scholar to travel abroad and complete their training at a university in Europe or the United States before finally resettling in China, and Wu followed suit.  In 1936, she left China with the intention of going to the University of Michigan for a few years, and then returning to her family.  As it happened, it would take her another 23 years to see home again, with only her family’s graves to greet her.

That was in the unimaginable future, however, when Wu’s ship pulled into San Francisco, bringing her within the orbit of the hottest physics department in the world at UC Berkeley.  EO Lawrence was there building his revolutionary cyclotron devices for investigating the fine structure of the atom.  A young Robert Oppenheimer was there too, striding about like a complete rock star on a cloud of his own charismatic brilliance.  Exciting things were happening at Berkeley, and it was overwhelming to find herself in the middle of it.  Add to that first impression Wu’s discovery that the University of Michigan made female students use the rear entrance of the physics building to preserve their second class status, and it wasn’t hard for her to make the decision to stay on at Berkeley.

Meanwhile, in China, first the war against Japan and then the civil war between the Communists and the Kuomintang prevented Wu from returning home.  Instead, she made a new life in the United States, marrying a fellow physicist and moving to the East with him, eventually landing at Columbia University where she specialized in radiation absorption problems related to the Manhattan Project during the war, and on issues of beta decay thereafter.  Routinely paid much less than her male counterparts, she nonetheless was widely respected as a first rate experimental physicist whose results could be implicitly trusted.

And that’s where she was when the parity problem came to her door, a forty-five year old experimentalist with an iron clad reputation, and a world authority on beta decay.  But before we can understand her experiment, we need to talk a bit about parity first.

Consider a clock, with the second hand ticking from the 3 to the 6 on the clock’s face.  If we look directly at the clock, we see this happening in the clockwise direction, as expected.  If we look at a clock in a mirror, however, the motion of the second hand is counter-clockwise, BUT it is still moving from the 3 to the 6.  We have flipped the coordinate plane (what was left is now right, what was clockwise is now counterclockwise), but the overall process stays the same.  This is what we expect in the real world – if you look at a process in the mirror, the physics stays the same.

Parity started off as a simple observation about the symmetry of electromagnetic wave functions.  That symmetry can either be Even or Odd (think back to pre-calculus, where a cosine curve, which is a mirror reflection of itself across the y-axis, is an even function, whereas a sine curve, which does the exact opposite thing on either side of the y-axis, is odd).  Even functions have parity of +1, and odd ones have parity of -1.  All “parity conservation” says is that, whatever number you start with, that’s the number you need to end with.  Later, this mathematical interpretation of wave functions was revealed to have a connection with the left-right symmetry of a process.  Because parity had been observed to be conserved in so many physical reactions, physicists concluded that nature must indeed not care about right or left, just as our clock didn’t.  It behaves the same whether we look at a mirror reflection or the original process.

The idea struck most scientists as indubitably correct, even though it had only been confirmed for electromagnetic and strong interactions.  Enter the kaon.  The Tau, which decays into three products, would have a parity of -1.  The Theta, which only decays into two, would have a parity of +1.  That’s fine if the Theta and Tau are two different particles, but all the data gathered during the early 50s suggested that they weren’t.  How could a single particle decay into two different parities and still conserve parity?  The daring answer was that parity conservation didn’t hold for the weak decay processes, and it was first suggested in print by two other Chinese scientists living in America, Yang and Lee, in a 1956 paper.

Most who read the paper thought conservation so well attested, and the experiment Yang and Lee proposed to debunk it so complicated, that it was not worth the time or resources to follow it up.  Pauli said he would “bet anything” that parity would be conserved.  Feynman, who was among the first to propose the parity nonconservation idea, ended up betting a friend $50 that it would nonetheless never pan out.  Martin Block promised to eat his hat if conservation didn’t hold for the weak interaction.

Wu, though, had an unfailing nose for what ideas were worth pursuing, and a technical rigor and ingenuity to see them through.  The defining experiment involved cooling Cobalt-60 down to a hundredth of a degree Kelvin, a temperature at which its atoms can be induced to spin in one direction, and measure the number of electrons spun off from the top and bottom of the cobalt mass.  If they are the same, then parity is conserved, since that way both the original cobalt atom and its opposite-spinning mirror copy will appear exactly the same.  But, if one side emits more electrons than the other, parity would not be conserved, as whichever pole the atoms appear spewing from in the original, they will be spewing from the opposite pole in the mirror reflection, which would be like our clock hand stubbornly insisting on moving clockwise in spite of being reflected.

She overcame the skepticism of her colleagues, technical challenges in constructing a device that wouldn’t lose the uniform spin of the cobalt atoms under the influence of the heat generated through radiation, and professional tensions to finally put together the perfect experiment.  Checking and double-checking her results, she felt confident announcing in 1957 that parity conservation was dead.  In 1958, Yang and Lee received the Nobel Prize for their paper, but Wu was excluded entirely, and in fact never received a Nobel for any of her work. From that triumph, she went on to an equally intimidating experiment in 1962 proving Feynman and Gell-Mann’s idea that a universal theory united muonic decay and beta decay.  Again, the respect she received for this work was unilateral, and kicked off decades of research on the relation between electromagnetic and weak interactions.  Not resting on her laurels, Wu jumped into an even more ambitious project to study double beta decay in a lab built 2000 feet under the Earth’s crust.  In her sixties, when most physicists are far beyond their prime, she was still doing important work, studying the iron in sickle-cell patients, inventing new experimental detectors, and establishing the completeness of Quantum Mechanics.

All of that while traveling often to Taiwan and China, advising the former’s nuclear power program, and endowing an educational scholarship in her father’s name for the latter.  She also was a tireless advocate for women’s scientific education, pointing to the appalling fact that only 3% of physicists in the United States were female, and her own struggles to finally be recognized as an associate professor at Columbia compared to the unrestricted opportunities she enjoyed growing up in the Chinese Republic.

Finally, at age 68, Shien-Chiung Wu retired from experimentation, though she maintained her office at Columbia University to correspond with the new generations of physicists seeking her advice.  She lived modestly with her husband until her death in 1997 at the age of 85.

The only full length biography of Wu available in English is Madame Wu Chien-Shiung: The First Lady of Physics Research, a translation of Chiang Tsai-Chien’s book.  It is full of rich anecdotal and cultural information, but skimps on the explanation of her scientific work somewhat.  It also reads very much like a direct translation, and repeats itself A Lot.  I didn’t mind too much, because I taught for ten years at a Chinese school, and so this way of telling a story had a sort of warm nostalgia for me, but I imagine it could be annoying for others.  She also has a nice write-up in Darlene Stille’s Extraordinary Women Scientists.  More readily available, James Gleick’s Genius: The Life and Science of Richard Feynman has a bit on the parity controversy, but not on Wu, and doesn’t go into the nitty gritty too much.  Feynman’s Lectures has some bits on the physical interpretation of parity in chapter 18 of volume III that are a useful supplement too! 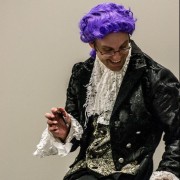