This last weekend, I joined the Chicago Skeptics on a tour through Wisconsin's own Xanadu of kitsch, House on the Rock. This was followed by a lovely concert by the fabulous George Hrab.

I initially wasn't going to post about the House on the Rock here at Mad Art Lab, as the House on the Rock is pretty much the antithesis of science and logic. It's a museum without labels, where at least half of the items are fake, and the other half are presented without any explanation or reason. There are warehouses and warehouses of stuff, where broken calliopes wheeze away and display cases full of coffee cups overlook a three-story-tall statue of a whale battling an octopus. I've been through the place twice, and both times, I saw someone just snap and start screaming in bafflement. (In fact, here's an audio recording of Mr. Hrab doing just that.) Lovecraft would have been impressed.

Photos behind the jump. 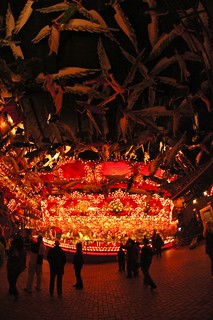 My full gallery of photos can be found here.

As I said above, this epic experience was followed by a wonderful concert by George Hrab. After the show, he stuck around and played duets with Mad Art Lab's own Smashley! Here's a link to my full story over at Tin Lizard Productions, and here are some photos: 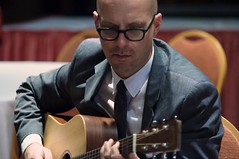 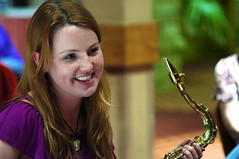 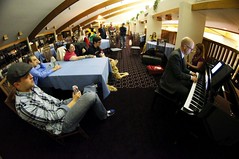 Full gallery of my concert photos can be found here.