Hey, I’m Glendon Mellow, a fine artist & illustrator, and I blog about art, evolution, copyright and atheism at The Flying Trilobite and you can see my portfolio here. This is my first post on Mad Art Lab, and thanks to Amy for the invitation and to Brian for feedback!

Fed up with the discussions for accommodating religious beliefs at the expense of science, I made a tweet into a painting. Tweet: “I’m thinking scientific accommodation of religion is akin to letting someone take your King’s Rook off the board because you’re winning.” 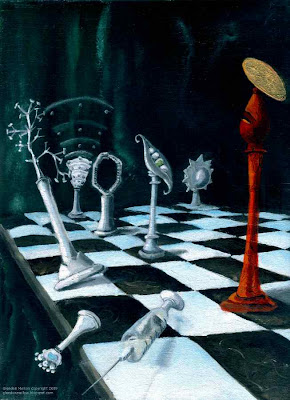 When I created this a couple of years ago, I held a contest to see who could guess all the sciences depicted in the metaphorical chess board.

Western Fine Art history illustrates the domination of religion on culture. As some of us in the 21st Century embrace atheism and a host of secular and progressive values, this will be increasingly reflected in fine art as well. But how do we make it?  How do we make artwork embracing secularism, or even plucky spunky ‘New Atheism’?

“If history had worked out differently, and Michelangelo had been commissioned to paint a ceiling for a giant Museum of Science, mightn’t he have produced something at least as inspirational as as the Sistine Chapel? How sad that we shall never hear Beethoven’s Mesozoic Symphony, or Mozart’s opera The Expanding Universe.” (Richard Dawkins, The God Delusion, p 86-87)

We can create this art movement now if we wish -there are plenty of amazing atheist and skeptic artists out there, and finding each other is easier than ever. Sometimes Inspiration strikes and sometimes it’s carefully constructed and nurtured. Though much of my artwork contains little in the way of direct atheist activism, my belief is that we need a myriad of voices in atheism to bring it to the mainstream and to guard against religious excesses. Personally I admire the forthrightness and vocal nature of the Gnu Atheists – Benson, Myers, Coyne, Christina, Blackford and McCreight, for example- who call abuse abuse and tend to engage specific examples instead of philosophical discussions of tone. Martian giraffes notwithstanding, these writers don’t typically engage in painting and drawing.

When something happens that causes me to feel outraged at behaviour by religious individuals or institutions, I want to address it, I want to use any talent I can bring to bear to critique it and shed light on it. I want to throw my support to the other side. Yet painting an image that effectively does what these writers do is something that eludes me most of the time. Most of the work I do is heavy on metaphor – perhaps the direct and specific nature of these atheist writers I admire doesn’t lend itself as easily to a metaphorical image?

Political cartoons do – and they can do so powerfully. But as an oil painterly fine artsy creator how do I move the nature of a political cartoon into the metaphorical image of a painting?

Here’s another attempt of mine. 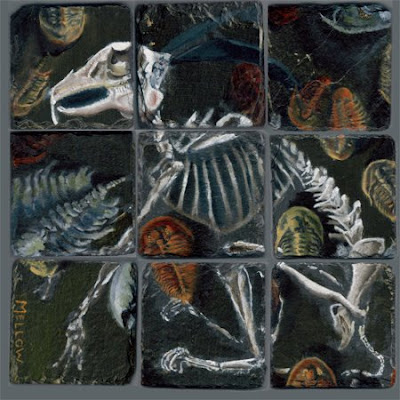 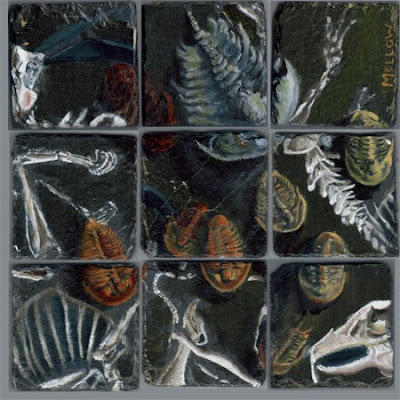 Biologist J.B.S. Haldane, so the story goes, answered that the fossil record of evolution could be falsified by, “fossil rabbits in the Precambrian”.  Above, I’ve painted a skeletal rabbit on 9 pieces of shale that can be rearranged to show a group of trilobite fossils. I tried to avoid the punchline criticism of the particular belief. Does it work?  Or is it just about science?

What’s your favourite piece of fine art or artist that supports an atheistic worldview? 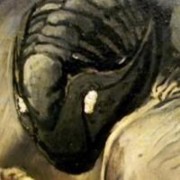 Glendon Mellow - Art in Awe of Science http://glendonmellow.com Glendon was born under a cabbage leaf in the summer of 1974 covered in stork feathers and placenta. He works as a fine artist and illustrator, ranging from fine art commissions to tattoo design to museum display. Illustrations and writing have appeared in Earth magazine, Secular Nation and Scientific American's Guest Blog, and books including Geology in Art and The Open Laboratory. Sometimes instead of painting, he opens his mouth to speak about art + science in places like the Center for Inquiry Ontario and ScienceOnline in North Carolina. Glendon has received a Bachelor of Fine Arts Honours degree from York University in Toronto, Canada and is bloody pretentious about it. Glendon shares his art process at his blog The Flying Trilobite, and tweets at @flyingtrilobite.