In popular mythology, the 1687 publication of Newton’s Principia was the culminating moment when one human told the world how the universe works, performed his century’s equivalent of the mic drop, and then received the adulation that was his due.  Of course, it worked nothing like that, and while England was quick to lionize his intellectual achievement, it took half a century for his ideas to catch on in continental Europe.  For reasons at best understandable and at worst downright xenophobic, the scientific community of the mainland spent those fifty years pulling its hair out trying to do deference to every half-expressed notion of Descartes or Leibniz while steadily and insistently denigrating Newton.

She was raised with a better than average education for a woman of her era, which is to say that she had a good grounding in the classics, and a particular gift for languages (she would eventually learn English, Latin, French, German, and Flemish), but was not given an education in science or math until after she married and had the wherewithal to hire her own private tutors.

And there began one of the truly amazing stories in the canon of intellectual history.  Starting from virtual scratch at the age of 28, she made of herself one of the leading mathematicians of Europe by the time of her death a mere fifteen years later.  Beginning from the basic concepts of algebra, she devoted a dozen hours a day to the improvement of her mind, sometimes plunging her arms into ice water to keep herself awake deep into the morning hours in pursuit of a particularly thorny problem.

Had she undertaken this on her own, a single woman of means pursuing her passion, it would have been impressive enough, but her life was bursting with other activity besides.  Married off at 19 to the Marquis du Chatelet, an older but entirely decent gentleman, she had the responsibilities of running the household and raising the children to attend to, as well as the mammoth set of issues brought to the table when she decided to take on as a lover the greatest but most trouble-prone author on the continent, Voltaire.  Together, the pair set up a scientist’s paradise in Cirey with the blessing of the marquis, and they spent their days in experimentation and Newtonian studies, eventually jointly authoring a staggeringly popular book that attempted to explain Newton’s ideas in popular language to a jittery and prideful Europe.

But Émilie wasn’t done.  Though Voltaire was content to remain a partisan Newtonian, Émilie knew that the full truth, if it was ever going to be found, would lie in an unbiased and impartial review of all the ideas currently available, to which end she researched and wrote her great Institutions de physique (1740), a review of the history of physics down to her own day, with equal weight given to the insights of Descartes, Leibniz, and Newton.  While praising Newton’s mathematical rigor, she also noticed that his reliance upon the hypothesis of absolute space was potentially problematic (as it in fact turned out to be, though it took another two hundred years for us to realize it).  At the same time, she recognized that Leibniz’s notion of vis viva was something independent of Cartesian momentum and advocated for a more thorough investigation of its properties (which, thanks in part to her, ultimately happened, and today we call it Kinetic Energy.) 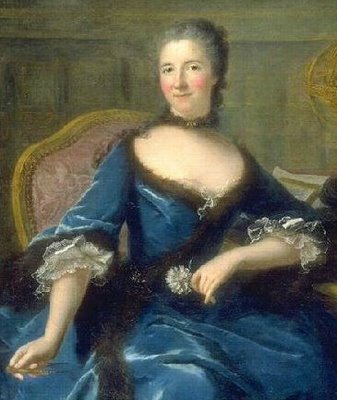 Still, though, the resistance to Newtonian gravitation remained, so she undertook the towering effort of her later life.  She resolved not only to translate all 521 pages of the Principia into French, but also to add an extensive commentary that included all of the data gathered in the intervening half century that supported Newton’s theories.  It was a massive undertaking that only somebody with a full and decisive grasp of both mathematics and the state of contemporary physics could have even contemplated.  Luckily, she had such a grasp and, in spite of starting a second love affair with a younger officer poet (to be fair, her relation with Voltaire at the time had settled down into something pleasantly platonic, so she wasn’t in fact double cheating on her husband, who didn’t mind in any case) and becoming pregnant by him at the age of 43, she managed to finish the task just before giving birth to a daughter on September 4, 1749.

Émilie du Châtelet died six days later and ten years after that her translation and commentaries of Newton’s Principia were finally published, a translation that remains the standard in France to this day.  Its deep synthesis of Leibnizian methods and notation to enhance Newton’s original examples presents a broadness of perspective that was without peer in its age, and one can’t help but grieve over the loss of what she might have accomplished had that final pregnancy not ended her life prematurely.

Or perhaps one can help it.  She lived a marvelous and full life far beyond the expectations of her time.  She did what she loved, whether it was staying up all night working through formulas or chatting with Voltaire for hours about materialism and the inaccuracies of the New Testament or throwing herself into the arms of impossible romance or losing immense amounts of money at the gambling table.  And she inspired a wave of women to follow her example, including the worshipful and brilliant Francoise de Graffigny, who would go on to write one of the most popular novels of the century.  Her philosophy of personal joy and improvement, as she wrote it in her “Discours sur le Bonheur” knew no artificial borders of tradition and is, today, in our era of trading grand passions for a flood of responsible micro-happiness units, worth turning our weary heads towards once again.

FURTHER READING:  Since the 1970s, Emilie has been making a steady comeback in the public consciousness.  If you can find a copy of Lynn M. Osen’s 1974 Women of Mathematics, the portrait of Emilie in it is brief but sparkling and poignant.  More recently, Emilie makes up half the material of Robyn Arianrhod’s 2011 Seduced by Logic: Émilie du Châtelet, Mary Somerville and the Newtonian Revolution.  Yes, I hate the title too, but the book within is wonderful, containing not only an account of these two astounding scientists, but a thorough treatment of the development of Newtonian thought in the 18th century with some smashing mathematical appendices.

For the fiction reader, Adrienne de Montchevreuil in J. Gregory Keyes’s Age of Unreason tetralogy is basically Emilie, except with the ability to command ethereal spirit creatures in addition to her wicked awesome mathematical abilities.  So, yeah, that’s worth a read.