Hi all, welcome to part two of this series of self-portraits by women! Today we’re moving a little bit forwards in time, but staying in roughly the same geographical area (16th century Italy was kind of a big deal for art history) to talk about Lavinia Fontana 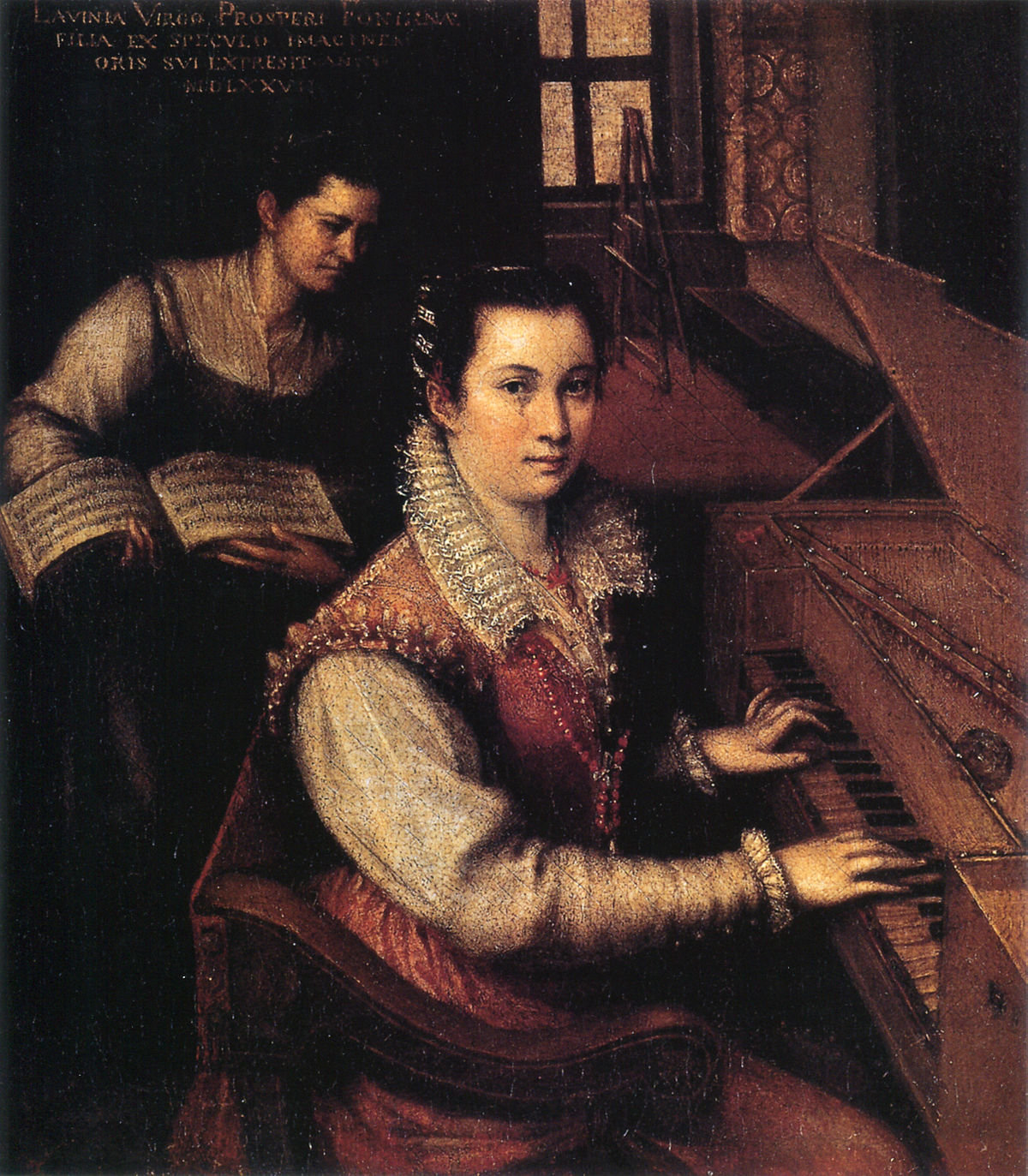 “Self-portrait at the Clavichord with a Servant by Lavinia Fontana”

Like Sofonisba Anguissola, Lavinia Fontana was also from northern Italy, specifically Bologna. This seems to have been the place to be if you were a fairly independent female in the 16th century, as she was one of over twenty women in the city who were recorded working as artists during this time period.

This painting has a bit more going on it in than Sofonisba’s portrait. Lavinia has a lot of things she want the viewer to know about her, such as her good education (the clavichord she’s playing, the Latin inscription in the upper left corner), her success and wealth (the servant, the fancy outfit*), and her painting (the easel in the background). While it might not appear so at first glance, I would argue that the painting aspect is the most important to Lavinia because of how she’s arranged the composition to move the eye around the page.

So something that’s kind of fun about 2d visual art, I think, is that you have a lot of control over the path the eye takes through the painting/drawing/etc**. The first thing you’re probably going to look at is her face, because it’s front and center, she’s looking at us, and humans tend to pay attention to faces. From her face the eye is drawn down her collar, along her arm, up the length of the clavichord which is pointing straight at the easel, which then loops back down to her face. There’s a bit of a secondary loop going on too, where you start in the upper left corner with the inscription and servant, than to Lavinia’s face, and then looping back up the to easel, framed in the window. The composition keeps your eye moving about the painting, keeps you looking where Lavinia wants you to.***

Lavinia seems to have made her reputation in at least in part on her ability to meticulously render over-the-top outfits (see Portrait of a Noblewoman), which is shown to nice effect with her fancy collar. One thing that came up a couple of times when researching her that I thought was kind of odd is that she’s very specifically credited with being the first female artist who didn’t work in a court or convent. Because…if you’re working for royalty/God it doesn’t count? Also, I suspect that it would be more correct to say that she’s the first female artist with a career who was also famous in her own time.

Lavinia was taught to paint by her father, who was also painter. She was so very successful that her husband, also an artist, gave up his own career to help out Lavinia with things like getting her paintings framed and acting as her agent. He also presumably helped take care of their eleven(!!) children. Her clients ranged from the Pope to the Habsburgs and there are well over 100 paintings attributed to her. In 1611 she was awarded a portrait medal****. The front is a pretty standard portrait bust, but the back is a fantastic image of Lavinia as Pittura, the allegory of painting. The wild hair and rolled up sleeves in this portrait are a far more realistic depiction of someone painting than the portrait featured here, and I think it rather suits her.

*I rather doubt she was wearing that dress while she was actually painting. Lace is EXPENSIVE, and paint is messy, although I suppose it’s possible that she was super tidy. Also note that with this pose she would have to look at herself in the mirror, then move to her canvas since not only is she not painting in the composition, but there isn’t even a space she could stick an easel off screen as the clavichord is in the way. Or maybe not, that background is probably invented anyways, so perhaps the clavichord is too. In any case, she’d have to move significantly between the pose and the painting, which I’ve done before and is really annoying. So, props to her.

**Some of this is probably only going to apply to people from cultures that read left to right, because reading trains us to assume that one side or the other is the start. I haven’t the faintest idea how much of a difference illiteracy would make. But, a general rule of thumb is that the eye is going to follow lines and be drawn to intersections/areas of relatively high detail.

***This painting specifically was a gift (or payment? The source refers to this a ‘wedding painting’ without much clarification. See end notes.) to her future in-laws, and so this portrait in particular is designed to show all the fantastic qualities Lavinia will bring to the marriage.

****These were apparently a Thing during the Renaissance. As far as I can tell the closest equivalent we have now would be a commemorative coin, except these were to commemorate individuals. I’m not sure whether you could commission one for yourself, or some official had to give it to you, or what, but they seem to be a pretty big deal.

-Stokstad, Marilyn. Art History. New York: Harry N. Abrams, 1995. Print. p716-17
-Tufts, Eleanor. Our Hidden Heritage: Five centuries of women artists. New York: Paddington Press LTD, 1974. Print.
http://www.britannica.com/EBchecked/topic/212506/Lavinia-Fontana
Lavinia Fontana and the Female Self
Virtue, Power, and Profession: A Study of Women in Renaissance Portrait Medals
http://www.webexhibits.org/pigments/intro/renaissance.html I don’t really touch on this, but if you’ve ever wondered what exactly they were using to paint with, this is an interesting resource.