This past weekend, Nasa Ames had an open house to celebrate their 75th anniversary — something that hasn’t happened in 17 years. It was amazing, and some of you probably couldn’t make it on account of not being in the bay area (or not being up all night the night they released tickets). We went, and took some pictures!

One of the coolest parts for me was being able to go inside hangar one. It’s something that, living in the south bay, I’ve driven past and seen from the highway a hundred times, and been impressed by the scale — 200 feet tall, covering 8 acres of ground. It’s so big that sometimes fog forms at the ceiling, and it needed to be that big for the airships it was designed to hold. But it was even more impressive up close, and walking inside it was the kind of thing that absolutely dwarfed me.

For the people who drove there and parked, this was their main entrance to Ames, which would be a great introduction to the open house — get your bag searched, then walk through the giant hangar.

Scattered around hangar one were research and military aircraft, like this one:

It’s designed with over-wing jets, which serve two purposes: first, they greatly increase the lift generated, which allows for a shorter takeoff and safe landing at lower speeds. Second, they buffer the noise of the jets from the ground, creating much less ground noise as the airplane flies overhead. This one is basically a proof-of-purpose, designed and built as a way to gather data about aeronautics and not as a prototype for commercial production. But Russian aircraft built on similar principles are still in use, and some of the properties of the aircraft are in use with in the US Air Force C-17.

In addition to opening their doors to the general public, NASA Ames opened up some of their highest-profile spaces for “backstage passes” — in our case this led us to the National Full Scale Aerodynamics Complex and their biggest wind tunnel, some 80 feet by 120 feet in cross section.

This thing is big enough to fit a full-sized 737 inside, equipped to produce 100 knot winds powered by 100 megawatts of power. As we walked up to it, other spectators were commenting on how they could hear it from their homes in Mountain View or Palo Alto — miles away, and despite 6 inches of acoustic padding on the floor and ceiling and 10 inches on the sides. (No guarantees it wasn’t something else they were hearing, but it’s a really massive wind tunnel.)

The tunnel opens on the side, with a crane to load in whatever heavy air- or space- craft is being tested. We had to walk around the back, stand in a long line, and climb 42 stairs to get inside.

The light filtering in through the intake panel was a beautiful sight. And the experiment they were doing was, frankly, adorable.

On the way out, we caught a glimpse of the powerful fans that drive the wind tunnel, and the panels guiding the airflow into them. You can see fans three and six of six here.

Of course, no visit to NASA would be complete without seeing some rovers, so we meandered from the wind tunnel to a space named “Roverscape” in the hopes of seeing some robots.

This little guy is a domesticated cousin of the mars rover, mostly designed to gather data about relatively inaccessible areas of our own planet. It’s been sent to the Arctic and the Arizona desert so far.

But the real roverscape was a testing ground for rover technology: namely, how many things rovers could trip over.

When I walked by this rover at first, it was sitting right by the fence, at the bottom of the hill, and struggling enough that I caught the thrilling moment when it was rebooted. By the time Anne got there later in the day, it had climbed to the top of the hill! So, go rover!

One new concept NASA was toying with, and showcasing, was so-called tensegrity robots. They’re based on structures of bungees and sticks which are held in place by tension on the bungees. They’re compliant and self-protective, because adding force to one point will deform it but there is enough spring in the system to spring back. They don’t care which way they land because there’s no real top or bottom. Which means that a lot of the problems rovers might run into when they are thrown onto another planet and fall — literally — from outer space could be avoided. It’s a pretty new concept, and getting them to actually move is, well, exciting:

There was a lot more there, and a lot more that we couldn’t see or take beautiful pictures of, but it was a great day! And I even made a new friend. 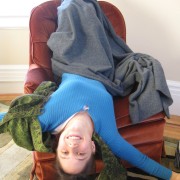 Elizabeth is a geneticist working for a shady government agency and therefore obliged to inform you that all of the views presented in her posts are her own, and not official statements in any capacity. In her free time, she is an aerialist, a dancer, a clothing designer, and an author. You can find her on tumblr at madgeneticist.tumblr.com, on twitter at @lysine_rich, and also on facebook or google+.