I got sorta giddy when I saw that Nick Cave had written a song about the Higgs Boson, and it’s about the delegitimizing of religion in the face of science to boot. But then it turns out to be more of a lament than anything (Who cares what the future brings?). While Cave has always been critical of religion in general, he is notoriously slippery and hard to pin down on the God question. He seems equally conflicted about the “God Particle” (I know, I know, had to say it in this context).

Around 8 minutes long, this smoldering slow burner is off the Bad Seed’s new album, Push the Sky Away.

He pictures Robert Johnson and the Devil, then Hannah Montana doing the African Savannah (perhaps just simulated in a zoo). Then, the lines “Mau Mau ate the pygmy/The pygmy ate the monkey/The monkey has a gift that he is sending back to you” seem to be hinting at the origin of HIV. Missionaries also bring small pox and the flu, along with their Higgs Boson Blues. The narrator is driving down to the LHC (with an inexplicable stop in Memphis), contemplating the tension between savagery and civilzation, between scientific rationality and musical spirituality.

Hannah Montana becomes Miley Cyrus floating in a pool, which brings to mind his debauched character Bunny Munro. In Cave’s novel The Death of Bunny Munro, the title character constantly obsesses about Avril Lavigne and Kylie Minogue (namely, her gold sequin hot pants). Is this Miley/Hannah Montana inclusion just maybe because of her recent sciencey proclamation, “forget Jesus … Stars died so you can live” and her Lawrence Kraus fangirling? Perhaps, but it’s more likely just a variation on the “existentially-adrift dirty old man with a pop star obsession” theme.

I promise to inquire if I get close enough during one of the three Bad Seeds/Grinderman performances I’ll be seeing in April. 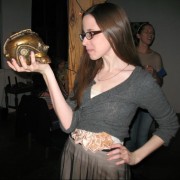 Katie is an animator and illustrator of human innards living in Chicago.