There is an image that is so pervasive that it has been a meme for over 40 years. It has been the default icon to represent evolution since it first appeared. It has been caricatured, satired, stolen, parodied, plagiarized, and printed on t-shirts the world over. Despite its inaccuracies and frequent mis-attribution to Charles Darwin, this work has been inextricably tied to the evolution debate.

I speak of The March of Progress by Rudolph Zallinger and it is the subject of this week’s skeptical art critique.

My question for you is:

What impact has this image had on the discussion of evolution?

The ART Inquisition (or AI) is a question posed to you, the Mad Art Lab community. Look for it to appear Mondays, Wednesdays, and Fridays at 3pm ET.

This image appeared as a fold-out section in Time-Life’s 1965 book Early Man. It represents what was thought at the time to be the progression of human evolution, even including some side branches if you read the notes.

If anyone does not immediately recognize the image, perhaps the folded-in version will spark something.

Still not doing it for you?

What if we select the hominids more carefully and ditch all those troublesome words?

And then let’s put it on a T-Shirt with a trite message:

Familiar now? It’s everywhere. It’s the default sequence and layout for any discussion of evolution. Here are some more examples to help the discussion along: 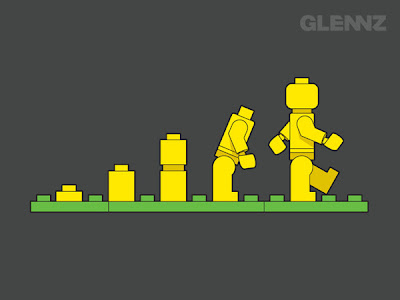 And let’s not forget to offend some people with editorial cartoons: