[Note: this is the second part of a multi-part series. Read the first part here.]

The first rule of stand-up–our teacher told us in our first class–is that it has to be true. Maybe not always literally or entirely true, but true on some deeper level. The job of the comic is to take that kernel of truth and build around it–to dress it up with punchlines and amusing detail–so that the mundane, everyday truth of the comic’s lived experience is transformed into a more universal Artistic Truth™ that the audience can recognise and connect with through their shared experience of living in the world. And then they laugh. Hopefully.

About a month ago I decided it was finally time to start working a longer story into my act. Standard advice for new comics is to avoid long stories early on, as they are harder to rotate into your set and riskier to perform: if a story takes a long time to tell and the audience doesn’t buy in early on, you’re sunk and there’s no coming back. And so I waited until I felt a bit more confident in my abilities on stage before I decided to tackle the telling of a story that I’d already been kicking around in my head for several months.

The mundane truth upon which it’s all built is that several months ago, on a dating app that shall remain nameless, an eighteen-year-old activist type messaged me to say that my use of Japanese characters on my profile was “offensive,” presumably on the grounds of appropriation. It was unclear whether or not he himself could read what I had written, as he did not mention the content. He went on to make an ethnic claim on the Kanji through his partial Japanese ancestry, which I admittedly lack (though it is sort of an odd argument given their origin is not Japanese). When I tried asking why using a language one has studied for years is not an appropriate means of meeting other speakers of the language, he responded only that it was “offensive” and then blocked me before the conversation could continue.

Needless to say, the mundane truth of what happened isn’t especially funny and at the time was mostly just frustrating. It does, however, provide an excellent skeleton for a story that touches on a number of interesting issues, including the nature of dating apps, arguing online, activism, “political correctness,” and cultural appropriation. And so I began to dress the story in details, some true and some “true,” to create a heightened version of what had occurred.

First, introduce a theme by way of introduction: it’s well known at this point that certain comics have begun refusing to play universities because students are so easily offended by everything. I, as a some-time university professor, disagree. But I did have this one experience…

Second, a digression that also serves to set the scene: I am thirty-two years old and not in especially good shape. So receiving a message on a dating app from a very attractive eighteen-year-old immediately set off some red flags. Something was about to go very wrong.

Third, create a heightened reality for the “truth”: his profile reads “interested in social justice and *eggplant emoji*” (a real profile I have seen, though not his, which buys an extra joke about eggplant representing a tool of the patriarchy). Note his resemblance to a young Leo DiCaprio as he makes his claim to ancestral ownership of a language he doesn’t know (an embellishment that I recognise to be approaching dangerous ground, but I stand by it in the context of the larger bit).

Fourth, l’esprit de l’escalier: it was not until long after the conversation in question that I thought to make a parallel claim on the Latin alphabet, thanks to being half Italian.

Fifth, self-awareness and deprecation: I was being forced to examine my privilege, after all, which is unpleasant even when you are ultimately convinced you are in the right.

Sixth, the big ending: the reveal the whole story was working up to. Except, what could that be? In the real world this story had no ending. He blocked, I stewed, and eventually went to bed. That of course, isn’t funny. To be honest, I had a lot of trouble coming up with an effective ending to the bit, and ended up going through several.

My first instinct is usually to make myself the target a given joke, but in this case that meant two unappealing options: either the reveal is that I decided to erase the Japanese from my profile because white liberal guilt trumps all (which betrays the underlying message that languages belong to all their speakers), or alternatively that I actually wrote something insensitive/racist in Japanese that I have spent the bit cluelessly defending.

Although both of these endings worked decently with audiences, I didn’t feel particularly good about either of them. This was especially true of the second of the two endings, as it was hard to disentangle whether it was my supposed cluelessness or the phrase itself that was getting the laugh on the reveal. That was enough to keep me from trying it more than once.

But then, one night, it finally came to me. A happy ending to the story that was not only a clever turn on the argument, but just my style: stealthily filthy. After all, if it’s only a matter of having the right DNA…

Stay tuned for the next edition of Adventures in Stand-up, in which I write more words about things. 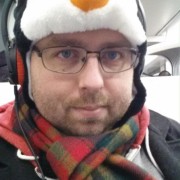 Dan holds a PhD in Music History from a major Canadian university and is now pursuing a M.Ed in Higher Education at another one, because he likes to collect very expensive paper. He performs stand-up comedy at venues all over Toronto when he's not busy playing JRPGs with his cat, Roy. You can follow him at @incontrariomotu, but he isn't going anywhere. You can also send him a tip on PayPal (paypal.me/dandonnelly) if you like his work!